Satellite navigation is based on the principle of using pseudorange measurements between navigation satellites and an autonomous receiver. The measured range differs from the true one by different delays and clock offsets, therefore it is called pseudorange. The presented model of open GNSS measurements differs from the generally accepted one by the separate division of systematic code biases into receiver and satellite biases, while systematic biases for each receiver are generally different for each satellite. This is especially important for GLONASS, because it allows to take into account the frequency division multiple access (FDMA) peculiarities and calibrate GLONASS receivers more accurately. 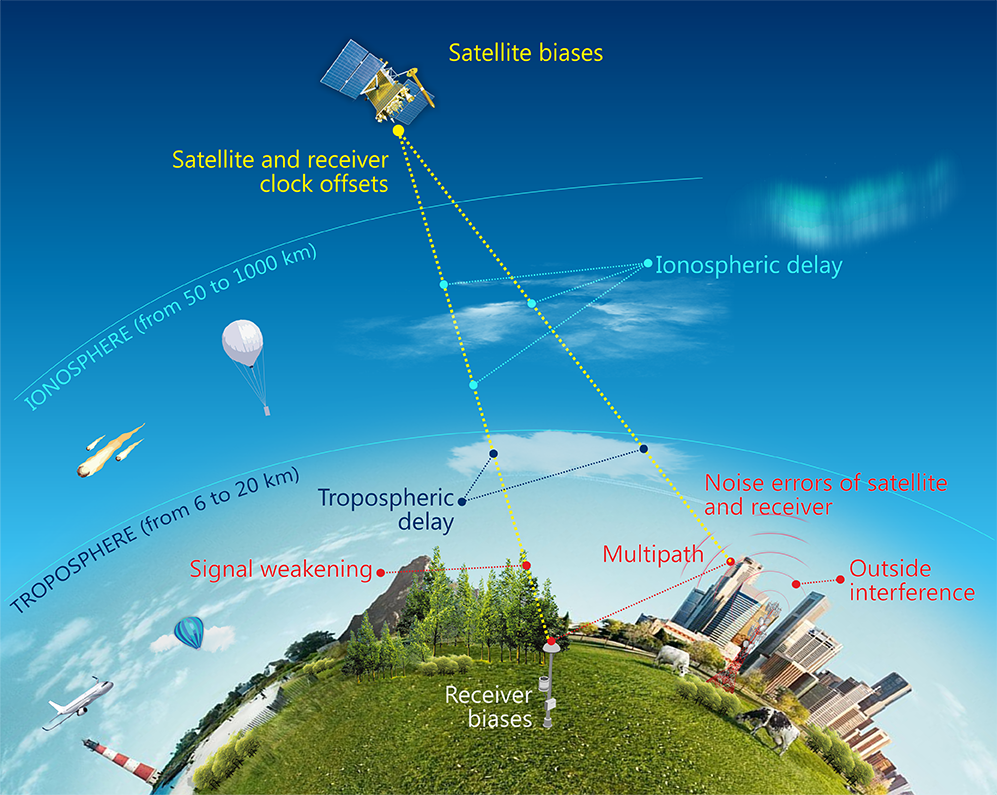 The pseudorange measurements of open GNSS C/A code signals for frequencies L1 and L2 (C1C and C2C in RINEX-3 notation [1]) can be modelled by the following equations:

To calculate the ionospheric parameters and the differential code biases (DCB), the so-called geometry-free combination of code measurements at two frequencies is used:

The total inter-frequency DCB is equal to the sum of the satellite and receiver DCBs and is defined as follows:

In the case of a single-layer model, the ionosphere is considered as a thin shell of constant altitude \(h\). Slant Total Electron Content \(STEC\) is estimated by the product of the Vertical Total Electronic Content \(VTEC\) and mapping function \(m(E)\), which depends on the elevation angle \(E\), the ionospheric shell altitude \(h\) = 450 km and the Earth’s radius \(R_\bigoplus\):

where \(E’\) – is the elevation angle at the ionospheric pierce point (IPP). 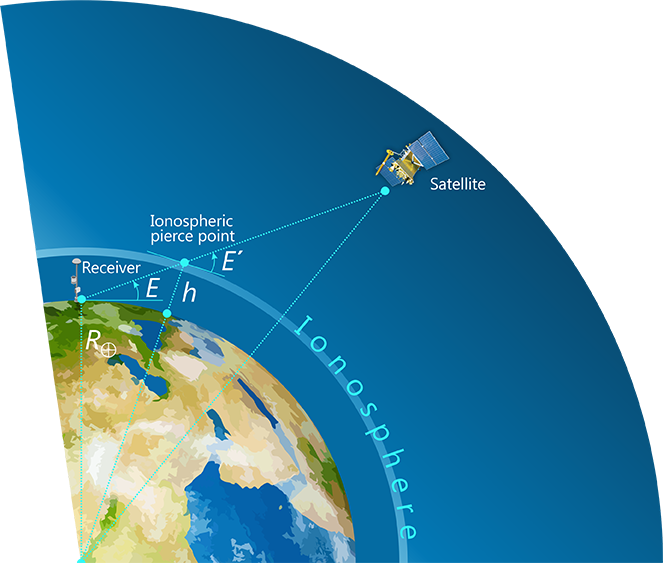 According to the IGS terminology inter-frequency delays are called differential code biases (DCB), interface control documents (ICD) of foreign GNSS refer to it as GD (Group Delay), ICD GLONASS define it as the time difference between navigation radio frequence (RF) signal transmitted in L2 sub-band and navigation RF signal transmitted in L1 sub-band. Since the ionospheric delay is inversely proportional to the square of the frequency, ionospheric value is required to determine DCB. It is assumed that the difference between measurements in the L1 and L2 sub-bands is caused only by the ionosphere, DCB delays, code noise and multipath. The total contribution of noise errors and multipath for a modern geodetic-class GNSS receivers, as a rule, does not exceed 1 m even at relatively low elevation angles from 10 to 20 degrees, i.e. these errors decrease many times with multiple measurements.

Strict division of the total satellite-plus-receiver DCB observed by each station into satellite and receiver DCB components is impossible. DCB division is based on the assumption that the sum of all satellite inter-frequency DCBs is equal to zero, as well as the use of some standard, which can be an "average receiver representing the network" or several selected calibrated receivers [4]. Differential code biases are estimated in two stages:

Further, three different methods [5] are considered for modeling the total electron content TEC in the ionosphere and estimating total DCB:

The first way to estimate the total satellite-plus-receiver differential code biases \(DCB_{GS,C1-C2}^{SC}\) relatively simple and used when the ionospheric delay is known in advance [6].

For example, it is possible to use existing global Ionospheric maps (GIM), which are published in IONEX format [2] by analysis centers of the IGS [13, 14]. In addition, since 2021, the daily global ionospheric maps of TEC by IAC PNT are publicly available [11].

To determine the total differential code biases, it is enough to process one pair of receiver-satellite measurements at a daily interval; the DCB is calculated as the arithmetic average of all geometry-free measurements combinations:

where the equivalent ionospheric delay for a geometric-free combination is determined by the previously described principle:

For example, Fig. 3 shows the receiver position; the one sub-satellite trace in two visibility zones on a daily interval is marked in red, and the corresponding ionospheric pierce points are marked in blue: 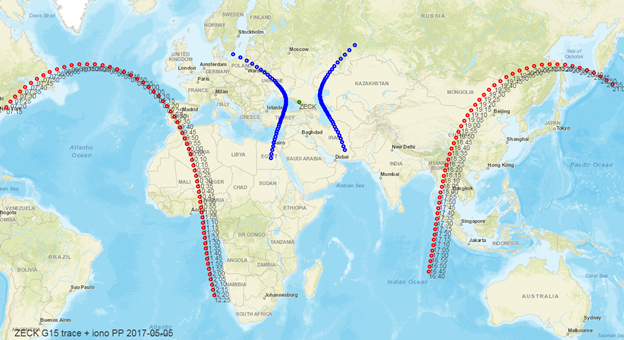 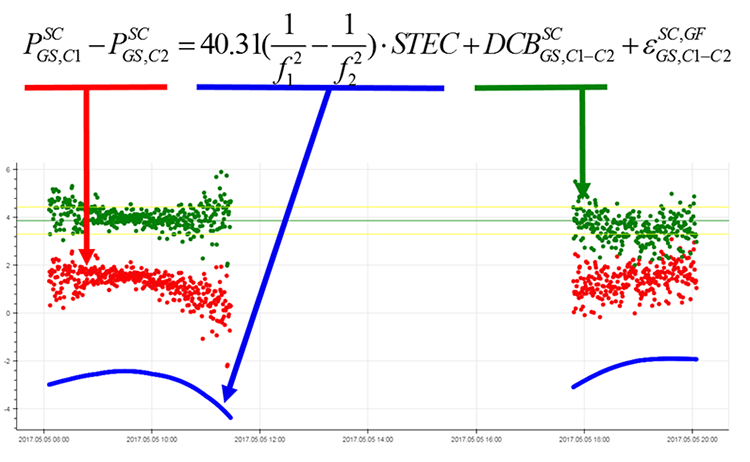 The second method for determining the total satellite-plus-receiver DCB is to estimate differential code biases \(DCB_{GS,C1-C2}^{SC}\) and local ionosphere parameters simultaneously. The calculation is performed for one receiver and all observed satellites using the least squares (LSQ) method. The advantage of this method is its sustainability and better accuracy. The local ionosphere modeling method using two-dimensional polynomial was introduced in 1999 [7]. Then the method was improved: a finite Fourier series expansion was added to the polynomial [8, 9].

Thus the total electronic content in the receiver local area is modeled depending on the geographical latitude \(\varphi\) and the sun-fixed longitude \(t\) at the ionosphere pierce point:

where \(\varphi\) – is geographic latitude of the ionosphere pierce point, \( t = \lambda - \lambda_{SUN} \) - is sun-fixed geographic longitude, it is denoted as local time in time units, \(E_{nm}\) – are polynomial coefficients, \(C_k\) и \(S_k\) – are coefficients of finite Fourier series to be estimated.

The rank deficiency is eliminated by the degree of the polynomial \( ( m_{max}, n_{max}=4 ) \), maximum degree of finite Fourier series \( (k_{max}=4 ) \), as well as by estimating the parameters for one receiver and all observable satellites (all GNSS). The ionospheric pierce points and the approximate local ionospheric area for the estimation of model parameters at the daily interval are shown in Fig. 5. 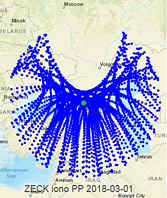 Fig.5. Ionospheric pierce points for one receiver on a daily interval

After estimating the local ionospheric model parameters and the total satellite-plus-receiver DCBs, total DCBs can be divided into the satellite and receiver differential code biases [8, 9]. To solve this problem, a certain standard is needed, that can be calibrated receivers or an "average receiver" representing the network. The resulting DCBs are stored in SINEX_BIAS format [3] files, which are published by IGS Centers [15].

At IAC PNT, the calculation of the local ionospheric parameters and the division of differential code biases have been conducted since 2017, the final DCBs in the SINEX_BIAS format are published on a daily basis [12]. The DCB estimation with regard to the GLONASS frequency division multiple access (FDMA) dependence, has been implemented using both the methods of an "average receiver" representing the network and a calibrated receiver [4].

The global ionospheric TEC maps (GIM) modeling is similar to the local ionospheric mapping using one receiver observations, but in this case a globally distributed receivers network is used for the estimation. On a daily basis, DCBs for all satellite-receiver pairs and the global vertical TEC distribution are estimated simultaneously using the spherical harmonic (SH) expansion depending on latitude and solar-fixed longitude:

where \(\varphi\) is the latitude of an ionospheric pierce point, \( t = \lambda - \lambda_{SUN} \) s sun-fixed geographic longitude, \(P_{nm}\) – are Legendre polynomials, \(С_{nm}\) and \(S_{nm}\) are SH expansion coefficients to be estimated. Both geographical and geomagnetic coordinates can be used in the model.

When constructing global Ionospheric maps, it is difficult to estimate the parameters in geographical areas where there are no GNSS observations, in particular, over the oceans. Since the arguments are latitude and solar-fixed longitude, time extrapolation with a low weight to empty spatial zones is used as a solution to this problem. In other words, the assumption is used that at a particular geographic point the ionosphere parameters correspond to the ionosphere parameters 15 degrees east, but 1 hour ago.

At IAC PNT open measurements of about 300 IGS stations are used to estimate the global ionospheric TEC maps, GLONASS and GPS observations are used. The results are published in IONEX format on a daily basis since 2021 [11]. The spatial resolution is 2.5 degrees in latitude, 5 degrees in longitude, the time step is 2 hours.